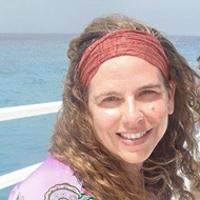 Last summer I attended a Nityananda Shaktipat Yoga retreat, How To Live A Life of Boundless Joy and Content. A month or two after the retreat, I had a dream, and most of it is still very vivid.

The dream was of me at a retreat. We began working with each other in small groups, and then afterwards we all gathered as a group in front of Sadguru Kedarji. There was one person in my group who I was arguing with back and forth. It was a battle of egos.

When we sat in front of Kedarji, He gave me a huge burst of Shakti, and there was a visible light or aura around me when Sadguru Kedarji transmitted that Shakti to me. I was instantly filled with Love. In the next group activity when I interacted with this same person, he would argue with me. When this happened, I focused on giving him Love instead of arguing back.

Then we sat in front of Kedarji again and He gave me another burst of Shakti. That visible aura and feeling of Love became even greater. My expression of Love for this other person grew. But, during the group activity, he pushed it away.

In my dream, this cycle continued. Each time this burst of Love increased, I thought to myself, “This is incredible! There’s no way this Love can get any greater than it is now!” Yet each time we sat in front of Sadguru Kedarji, it would become greater still. It kept growing and growing.

Then I realized that, as long as I was able to see an outside boundary to this light/aura of Love, there was room for it to increase until it reached infinitely. It got to the point where I was unable to do anything BUT have and express immense Love for this other person, regardless of his attempt to argue. It is said that the Guru can give Shaktipat, even in a dream. That must have been it! Kedarji speaks of the importance of imbibing Love for one another, without making distinctions in Love, regardless of the level and quality of our interacting. He transmitted this experience to me in that dream. Now I want to apply it to my life!

Jamie Walker has been a devotee of Sadguru Kedar and a student of Nityananda Shaktipat Yoga since 2010. She lives in Georgetown, TX and works as a supervisor in a local agency that addresses abused and neglected children.

Without Grace, The Teachings Are Useless.

One of the remarkable utterances of Sadguru Kedarji, an authentic Shaktipat Master, from the weeklong retreat is that there is a difference between teachings and the instruction and leadership of the Sadguru. Guru's Grace is everything. He also spoke about the necessity to wean the restless mind on to the Self with the “carrot and the stick” approach to imbibing the discipline necessary to break the habit of the mind wandering in worldly distractions.

The Power of The Master’s Grace

An Angel On One Shoulder and A Devil On The Other. My personal journey into the Kriya Phenomenon and the Grace-bestowing power of a Shakta adept, a true Siddha.

My Attachment To Words

My Attachment To Words.

Kedarji has told us many times that there can be no lasting spiritual attainment without being tested. Our attachment to words and praise and blame runs very deep…