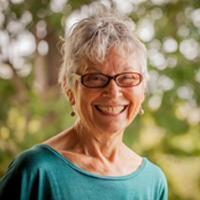 Lately I have been contemplating about Dharma. Sadguru Kedarji explains, Dharma is the act of loving the truth more than mundane life itself. The Truth is that we are all God. The Divine Power is our essential nature and is what fuels our dignity. Therefore, see everyone and everything as God. As I looked back over Dharma in my life, I decided to write this blog about several of my lessons about Dharma and dignity. One lesson enfolded over decades; the other happened quickly.

The first lesson, as I remember it, began in 1944 when I was 4 years old — during the 2nd world war. We lived in Oregon. My sister and I sat in front of the roaring fire in the fireplace. We played bombing the enemy by wadding up pieces of paper and throwing them into the fire yelling, “Bombs away”!! I thought we were safe. Little did we know that the Japanese were sending over ‘bomb balloons’ that were to explode close to where I lived. But, the bombs dropping on houses that I saw at the movies and heard about on the news was happening far away from me. Yet, I knew it meant when any plane flew overhead it could be dropping bombs – my child’s mind did not discriminate. I began having recurrent nightmares of Japanese soldiers overtaking me.

Sadguru Kedarji reminded us that Martin Luther King Jr. said, “Darkness cannot drive out darkness. Only love can drive out hate. Love is the only force transforming an enemy into a friend.”

By 1966, and in my mid 20s, my then husband got stationed in Hawaii, of all places. In the mundane world for him, this looked like the result of his hard study and expertise. For me, in the transcendental world it was simply perfect. Why? Because the Japanese were my landlords, my instructors and the police. They were everywhere. My nightmares continued. So, I prayed to God for a Spiritual Master who could lead me to permanent spiritual transformation.

That is why, in the mid-1970s I crossed paths with Swami Muktananda Paramahamsa and received my first Shaktipat blessing from him. Then, through my own effort and my Guru’s Grace, my nightmares began to transform. The soldiers in my dreams became so friendly that I was offering them glasses of water. Love replaced fear. Water was the powerful metaphor of the flow of God’s Grace. I remembered Swami Muktananda Paramahamsa saying practice staying humble. Who knows in what form God will appear. Acknowledge God in all forms. Pierre Teilhard de Chardin stated, “We are not human beings having a spiritual experience; we are spiritual beings having a human experience.”

Dharma is the act of loving the truth more than life itself. I came to the understanding that I love God more than the temple (my physical being); I am God not the temple. I am not my body. I am a spiritual being. I was never born and I never die. I remind myself of this daily.

Having dignity is the innate sense of having worth, of being valued, and of mattering. In the mundane world it can be validated or degraded by others’ actions and by policies and by cultural practices…if we let it.

In the mundane worldview, dignity is also tied politically to identity. If we live in a country where we are not able to establish our identity through a birth certificate or other legal document we have no standing, no rights and no access to resources. Our dignity is degraded in this process of disenfranchisement. Dignity is so important to our health that even in health care, as nurses, we are taught to preserve the dignity of our patients. Preserving patients’ dignity is part of the International Code of Ethics for nurses and is part of most countries code of ethics for nurses as well.

In the mundane world of our everyday existence, stress has been explained as beginning with an event that one perceives as either benign, threatening or actually harmful. Because it is a perception, this implies it is a mental activity and therefore amenable to alteration of the perception. If I think of myself as only my body then the types of threats would be different compared to my thinking of myself as Self, with no beginning and no ending, ever present, knowing, and powerful.

What would threaten my dignity would be different as well. For example, Viktor Frankl, while imprisoned in a Nazi concentration camp was able to retain his dignity because he knew himself to be the Self. It was something that could not be touched regardless of the seemingly humiliating events he endured. The most powerful and enduring force for having dignity is to know without a doubt that I am the Divine Essence, the Supreme Principle, Shiva, God. No one can take that away from me.

By the Grace of my Guru, upon retiring I became a visiting professor with a university in Tokyo. And that is how – now in my 60s, on the morning of August 9, 2005, I was standing on a small hill in Nagasaki Japan, with my friend doing a ritual Buddhist cleansing of her ancestor’s headstone. It was a beautiful morning and I was in a peaceful meditative state as I worked with her in this sacred act of cleansing, pouring water over the gravestone.

At 11:02am bells began ringing and ringing and ringing. She looked at me and said, “We Japanese are commemorating this time of 50 years ago when the plutonium bomb was dropped on my city.” I was aghast!! I knew the numbers. I’d seen the pictures. We held hands. We could not control the tears rolling down our cheeks – it was so unspeakable. We were one in the mundane horror and One in Transcendental Love. Time stood still. For me this was also a completion of a long and secretly tortuous journey to seeing everyone as God, beginning with Self-respect, a necessary step for Dharma.

Kedarji explained that, “Dharma is the act of loving the truth more than mundane life itself. Dharma that is full of integrity is imbued with social responsibility and spiritual practices and attitudes that promote respect and support dignity inherent in every embodied being. Dharma that is not built on Integrity is no Dharma at all. One only has to look at the news about riots related to wearing head coverings; diminished choice for control over one’s body in health care options; and systematic marginalizing of certain groups of people to understand the decline of Dharma in this Kali Yuga Age.”

What are Integrity, Dignity and Respect? Integrity comes from the Latin word integer meaning whole or complete. It generally means acting with honesty, being morally incorruptible and being willing to do what is right. Dignity comes from the Latin word dignitas. It means each person has an inherent worthiness. It doesn’t have to be earned or conferred. While respect, coming from the Latin respectus means ‘to look back.’ Respect is said to be earned, based on one’s past actions.

I remember being taught ways to respect my parents, what to say, what not to say. I was not taught about dignity nor was I taught how to establish boundaries to maintain my dignity, except to watch my mother verbally ‘swat down’ my sister if she transgressed my mother’s boundaries. While I seemed to crave respect, what I really wanted was to be treated with dignity.

To insist on being treated with dignity and respect I needed to have a strong sense of integrity. That integrity had to come from respecting and honoring my highest Self.

Yet, when a receptionist 50 years my junior said, “you may come in now my dear,” I immediately felt patronized and insulted. How dare she. My ego was ablaze. I must stand up for myself and protect my dignity. I must insist on being treated with respect. So, in a forceful tone, I ‘verbally swatted her down’. I said, “Don’t call me dear.” She blanched and mumbled an apology.

My mind continued to churn. She had no idea of how patronizing and disrespectful it is to call someone older than yourself dear. If I were 3 years old it would have been okay, perhaps. Used in that context, it sounds like a term of endearment when it is patronizing and usually a subtle power play. I thought, in upholding Dharma, I must pay attention to and then address even those smallest acts that undermine my dignity. And, even though I know I am the Self, it matters for the fabric of Dharma.

Now, for my second lesson!! By now you may have noticed the irony of how I mistakenly attempted to uphold Dharma. I scolded her for being patronizing and in doing so I was disrespecting her. Fortunately, I have a Spiritual Leader and Mentor who lovingly told me how I could have responded with compassion. Sadguru Kedarji said first, “See the Divine Nature in all beings to gain more experience of your own Divinity. Respect all beings. Regardless of what others think, we can give love and kindness even if we are not getting it in return. There is always a way to be compassionate even when drawing boundaries. Don’t put people out of your heart; keep it open to experience the heart of God. Practice staying humble. Who knows in what form God will appear, so acknowledge God in all forms.”

As I contemplated those words it became clear how I had slid into a state of contraction. I had felt small and unworthy. In attempting to feel better about myself I reached for the lower state of anger instead of the higher state of love and compassion.

I asked myself, “What am I willing to do when I love God more than the temple within which God dwells?” Being afraid to speak up and stand up for my dignity, the Truth of who I am, and failing to see the other person as Divine kept me contracted. That higher state is seeing myself as Divine and seeing the other person as Divine. From that vantage-point, I would see the innocence in her shortcomings. My anger would not have been triggered and instead, I would have felt compassion.

From that place of compassion, I would be able to set a Dharmic boundary and honor her dignity as well as my own. I would say, “I know it is common for total strangers to call older people by the intimate term ‘dear.’ But you may not realize that for many women who are older than you, it often feels demeaning. Many women were not brought up to speak out when patronized and subordinated. So, instead of using dear, you might consider saying ma’am or asking and using the person’s name or simply omit the term dear.”

Sadguru Kedarji said, “There is always a way to be compassionate even when drawing boundaries.” While my lessons in Dharma, Dignity, Integrity and Respect have come in different forms and at different times, they are strung together like pearls by the common threads of Compassion and seeing everyone as God. May all hearts be opened. Om Guru Om.

Sarah Porter, PhD MS MPH RN CHTP/I is a certified healing touch instructor, teaching in Hawaii and Japan. She has over 15 years of Healing Touch practice and 30 years of practice as a psychiatric mental health nurse and clinical specialist with a holistic perspective. She is the co-author of the book, “Women’s Health and Human Wholeness”, emphasizing the necessity of bringing wholeness back into the health care system. She also serves on the Board of Directors for our school